Arabian Nights with Next Stage Productions

An original four-part radio drama mini-series brought to you by Next Stage Productions in partnership with “In the Telling” podcast.

“The Arabian Nights” is a magnificent collection of ancient tales told by the sultana Scheherazade, who relates them as entertainment for her jealous and murderous husband, hoping to keep him amused and herself alive.

“A loss that can be repaired by money is not of such very great importance.”

The story of The Arabian Nights begins with Shahriar, a sultan who has just found out that his wife has committed adultery. Embittered and shocked, he decides that all women are evil and that the world would be better with less of them. So every day, he would marry a girl and have her executed by his vizier the next morning. However, the vizier’s clever and courageous daughter, Scheherazade, makes a plan that she hopes will save the rest of the women in the kingdom: she volunteers herself to be the sultan’s next bride.

On their wedding night, she tells an entertaining story about a merchant and a genie, but as soon as she finishes, she starts an entirely new story. It is late into the night, but the new story is not finished. Wanting to hear the conclusion, the sultan postpones his wife’s execution until the next day. The following night, Scheherazade finishes the previous story, but again starts a new one, forcing the sultan to postpone her death for another night. 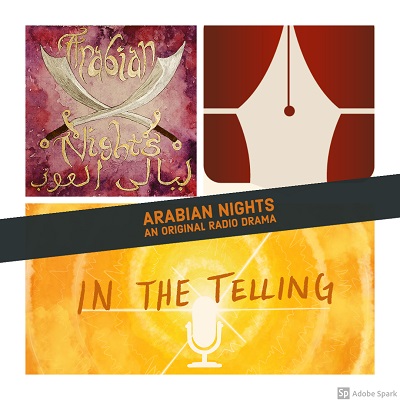 Adapted for Radio by Anthony Buck and Ed Farnsworth

“Arabian Nights” was first collaboratively adapted by Next Stage Productions as a full-length theatrical play which premiered in August 2015 at Clearfield High School in Clearfield, Utah.

I Made Her Do It