Filmmaking and live theatrical performance have, like many industries, been abruptly interrupted by social distancing and the pandemic. I watched as friend after friend lost valuable employment gigs and hobbiest performance opportunities.

I spoke at length with my good friend and collaborator Anthony Buck right at the outset of these cancellations on my podcast “In the Telling.” When the microphones were off, we picked up a topic we’ve kicked around before. Anthony really wanted to perform Hamlet before his age made it too late. I had told him previously that I would help produce that show if he was ever serious about it as long as I got to play Horatio. I love performing Shakespeare, but I’ve already played most of the interesting women. We had this sort of pie-in-the-sky verbal agreement that yeah, we would do that sometime.

Turns out this was the perfect time. All these talented people stuck at home and wanting something to do. Sure, rehearsing and performing over Zoom had never once been part of the Hamlet discussion before. So, what? Anthony and I are both doers, and we had decided this would be a fun thing to do.

We were right. It was nice to have something on the schedule. It was refreshing to see friends, even over the screen. It was envigorating to take on a role, even in strange circumstances. And on top of that, it was just the perfect excuse I needed to try editing a video. That’s not a skill set I had, and I wouldn’t say I have it yet. I’m under development. But I learned a ton putting my commitment to this project.

My state just went from the Red zone to the Orange zone. Live theatrical productions are still a gamble to prepare, produce and plan. But May brings with it another opportunity for me to develop my editing skills and continue to apply what I’ve already learned. Anthony and I have already cast our next Shakespeare piece. 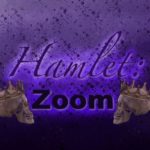 Cast (in order of appearance):

Much Ado About Nothing