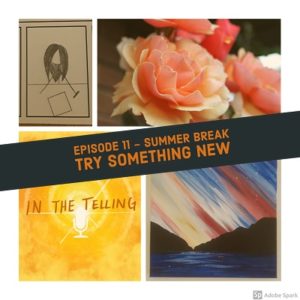 Time to Try Something New

I officially launched my “In the Telling” Podcast four months ago. In that four months I have published 100 different pieces of episodic content on arts, entertainment and storytelling. I never thought I would have a podcast, but I love trying new things. Now, four months and 100 uploads later, it’s time to take a break.

“In the Telling” will be taking August off, but don’t worry–it will be back in September with some fantastic content. During the break, I’ll be working on some new hobbies. I hope you’ll take advantage of the last official month of summer and try something new too. To help, here is a special episode on trying new things to give you ideas and inspire you to finally do that thing you’ve always wanted to do, or that thing you never knew you wanted to do. Have a great August!

Before going on summer break for the month of August, get some tips, tricks and motivation to pick up a new storytelling hobby or to take your work to the next level.

Advice for recording your first album from Gordon Vetas.
Advice for creating comics from Alondra Lopez.
Advice for transitioning from stage to film acting from Eric Millward.
Join Liz as she tries out a brand new video game, something she rarely does and totally sucks at. https://summonersfate.com/

John Cleese said, “Nothing will stop you from being creative so effectively as the fear of making a mistake.”

Trying my hand at Photography

A Love Letter to the Ensemble

Episode 73 Is Acting Creative? A debate between...